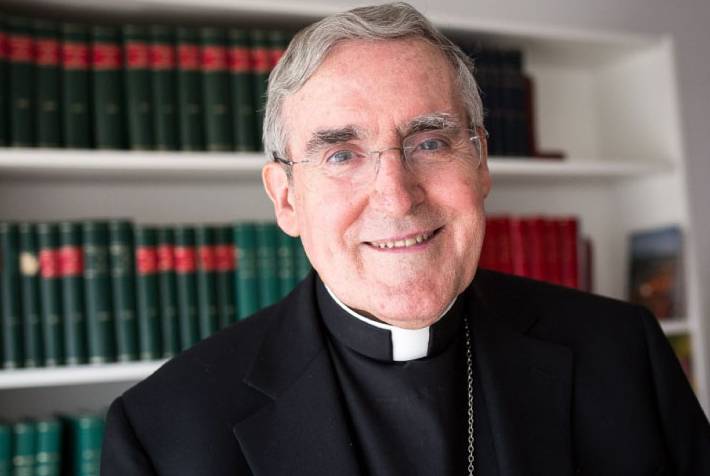 Mons. Lluís Martínez Sistach was born in Barcelona, the 29th April 1937. In 1954, after finishing high school, he entered the Seminari Major Diocesà in Barcelona where he did the Ecclesiastic studies. During that period, he also studied Teaching.

On 17th September 1961, he received the ordination by the archbishop-bishop Gregorio Modrego Casaus, at Santa Maria de Cornellà.

He was sent to Rome in 1962 with the aim to extend his studies of Canon law. In 1967, he was appointed as doctor in utroque iure by the Pontificia Lateranense University with a thesis about ‘El derecho de asociación en la Iglesia’

Back in Barcelona he was member of the sacerdotal team of Guinardó- his natal town-, religion teacher at the Institut IPSE of Barcelona, councillor of Equips de Matrimonis de la Mare de Déu and diocesan councillor of Graduats d’Acció Catòlica.

He worked as notary-secretary of the Tribunal Eclesiàstic of Barcelona, and in 1973 he was appointed as ecclesiastic judge of that Tribunal. He has been Canon law teacher in the Facultat de Teologia de Catalunya, the Institut Teològic Martí Codolar dels Pares Salesians and the Institut Superior de Ciències Religioses

In 1979 he was appointed as general vicar of Barcelona by Cardinal Narcís Jubany, with the special order of assuring the coordination of the many organisms of the diocesan Curia.

In 1987 he received more tasks: the coordination of the three diocesan councils – the Episcopal, the Presbyterian and the Pastoral-, the presidency of the advisory commission of parish appointments and he was appointed as member of the Consultants Council.

On the 13th November 1987, Pope John Paul II named him assistant bishop for Barcelona. He received the Episcopal ordination on the 27th December of that year in the Cathedral of Barcelona.

When Mons. Ricard M. Carles was appointed as archbishop for Barcelona he was named general vicar.

In 1983 he was elected president of the Associació Espanyola de Canonistes and in 1986 he released a book, Las Asociaciones de fieles, which has been published for five times in Spanish and one in Italian.

He was named bishop of Tortosa on the 17th May 1991 and took possession of the diocese on the 7th July 1991. As Tortosa’s bishop he took part in the Concili Provincial Tarraconense.

In 1996, Pope John Paul II named him consultant of the Consell Pontifici per als Laics, task that was renewed for another five year period on the 27th November 2002.

On the 16th Desember 2002, Pope John Paul II named him member of the Consell Pontifici per als Textos Legislatius.

On the 30th March 2007 he received the honor of Tarragona’s Favourite Son.

On the 17th October 2007 Pope Benedict XVI announced his appointment as cardinal.

He has published lots of articles for specialized and divulgation magazines about canonical and pastoral matters, especially about marriage, Church organization and relationships between the Church and the State.